The Pontifical Mission Society of Uromi Diocese recently marked a two-in-one celebration themed: GOD’S MERCY. The event spanned from October 20, through 23, 2016, at the Bro. Roman Catechetical Centre, Ekpoma. The event was a celebration of the Young Missionary Movement (YOMM) Mission Week and 5 year of YOMM existence in Uromi Diocese.

The event featured Rosary Procession and opening Mass presided over by the diocesan Director – Very Rev. Fr Michael Akhighu at 6:00PM on arrival day. Fr Akhighu welcomed everyone present, and spoke extensively on the Gospel bothering on Jesus Christ telling the disciples that he had come to cast fire on the earth. This fire he interpreted to mean zeal in the lives of the disciples. With this, he admonished the members to be zealous in their missionary life with the things of God.

Friday, the following day witness the prayer of the Mass presided over by the Director and a talk on MISSIONARY PARTICIPATION IN THE COPORAL WORKS OF MERCY, delivered by the Diocesan Coordinator – Rev. Sr Angela Chidiogo Okeke (DDL). There was a second talk delivered by the Asst PMS Director – Rev. Fr Kevin Ibhaze, titled: FULFILLING THE GRACIOUS DESTINY AS MISSIONARIES IN THE PROPAGATION OF FAITH. The mercy of God was the focal point of both lectures, and the need to allow oneself be built by God into instruments and ambassadors of God’s mercy that he has called us to become. And after the lectures, the members numbering 124 went out to evangelize. A total of 200 homes were visited and 244 persons contacted.

There were also sporting events to spice up the events and keep the members healthy, a quiz competitiion in which Br Akhoeba Marcellinus, from St Anthony Cathedral emerged winner and got the crown of MASTER OLD SCHOOL OF THE YEAR. Other contested events saw Br. Airemiokhale Collins from St. Gregory the Great Catholic Church, Ekpoma, emerge as the winner for

On Saturday, 22nd witness the Mass presided over by Fr Akhighu, after which members were transported to Abraka beach and resort centre for a picnic. Those who could not make the trip, stayed back and joined St Gregory Catholic Church, a neighbouring parish as they marked the parish Rosary Carnival to mark the October Devotion. At the close of the programme in the parish, the members were treated to a talk on ENTREPRENEURSHIP.

On Sunday, 23rd October 2016, the Weekend Programme rounded up with special thanksgiving Mass at St. Gregory the Great Catholic Church. The Holy Mass was celebrated by Rev. Fr Christopher Ehidiamen. In his homily, he spoke on PERSISTENCE. He admonishes all Christians to be persistent in all they do and pray without ceasing.

A high-point of the event was the thanksgiving procession by the young missionaries to the sanctuary in appreciation to God for his grace and success of their programme. It was a great opportunity for Bro Isaiah O. Okojie, one of the young missionaries to enlighten parishioners of St Gregory on the brief history of YOMM. Some of the salient points were that YOMM is an association for young missionaries who graduated from the Holy Childhood Association. The age range is from 14-25 years. The primary objective is to Evangelize the world.

The close of the Mass witness a general meeting of the young missionaries, within which election was conducted to see to the piloting of the affairs of the organisation for the next two years. The following emerged as new officers:

At the close of the election, an award was given to the Best Parish of the Year – St Benedict, Ubiaja. 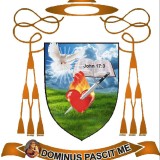